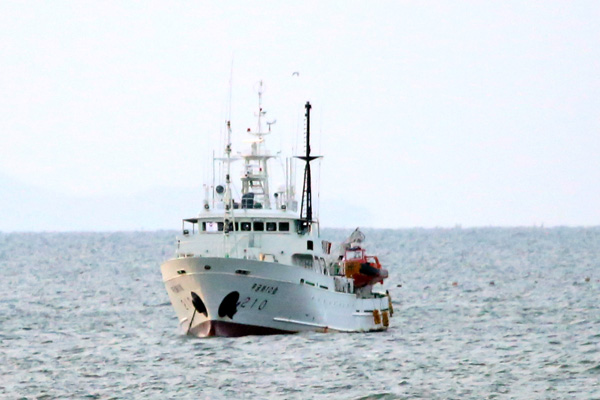 A fisheries inspection vessel on which the South Korean official shot dead by North Korea earlier this week had worked is on its way back to its home port in Mokpo.

The "Mugunghwa 10," which has been in waters near the border island of Yeonpyeong, is on its way to Mokpo as of Saturday morning.

The West Sea Fisheries Management Service said the boat will arrive in Mokpo, South Jeolla Province around midday on Sunday.

The vessel departed Mokpo on September 16 and is returning six days after the official first went missing on Monday.

The Coast Guard, which is investigating the incident, has requested the military provide information related to the official's possible attempt to defect to North Korea.

Coast Guard inspectors visited the Joint Chiefs of Staff on Friday but failed to view the records they requested. Military authorities reportedly said that internal discussion are necessary and they will notify the Coast Guard regarding the matter by Monday.

It is thought that the Coast Guard did not find clear circumstantial evidence pointing to the late official's intent to defect during its investigation of the vessel and crew members.

The Coast Guard is also analyzing the vessel's security camera footage and digital video recorder, as well as the official's bank accounts and phone records.

Meanwhile a search operation resumed Saturday morning near Yeonpyeong Island involving 30 ships and two helicopters to look for the remains or personal belongings of the official.
Share
Print
List