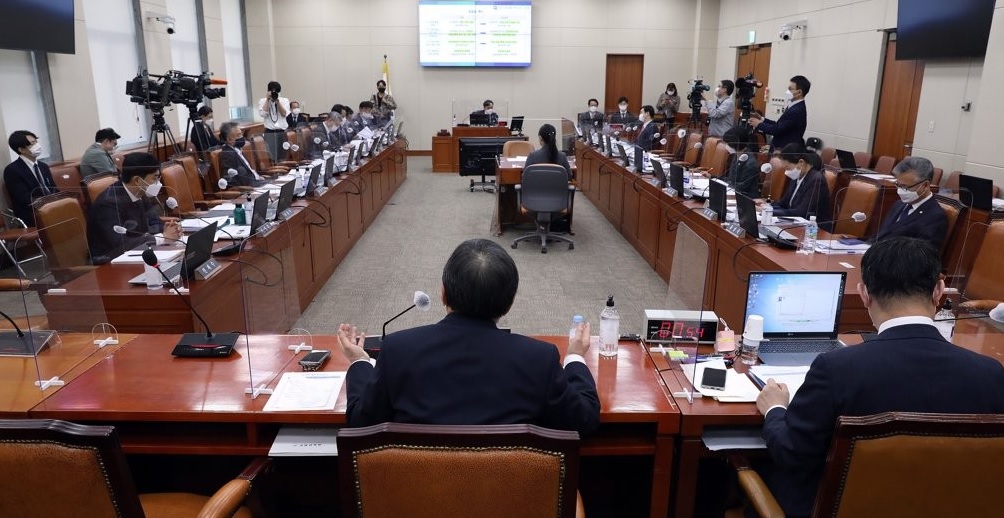 Anchor: Lawmakers accused the Financial Supervisory Service of failing to prevent controversial hedge funds from freezing withdrawals of massive investments and causing more than two trillion won in financial losses. At the National Assembly audit of the financial watchdog, the main opposition said collusive ties between officials, including a former presidential aide, and the now-defunct asset management firms led to the massive financial scandals.
Kim Bum-soo has more.

Amid financial fraud investigations, the operations of 520-billion-won, or 430-million-dollar, hedge fund Optimus Asset Management were suspended in June this year, causing losses to one-thousand-166 individuals and institutional investors.

At the parliamentary audit of the nation's financial watchdog on Tuesday, main opposition lawmakers alleged that Optimus' corrupt ties with government and ruling party officials led to lax supervision and the massive financial scandal.

[Sound bite: Rep. Yoon Jae-ok - People Power Party (Korean/English translation)]
"Mr. FSS Governor, Lime and Optimus assets are similar in that presidential officials are involved in the case. How would you respond to allegations that the supervisory function of the FSS failed due to the involvement of presidential officials?"

Opposition lawmakers raised allegations that a presidential official, with her spouse working for the hedge fund, intervened in the supervision of the firm before her resignation from the top office earlier this year.

[Sound bite: Financial Supervisory Service Governor Yoon Suk-heun (Korean/English translation)]
"While carrying out our supervisory duties, we are not influenced by [the presidential office] by any more than required by work or the law. There is nothing to worry about."

Also mired in a political controversy is Lime Asset, Korea’s once largest hedge fund, which suspended redemptions amid a probe into its investments earlier this year.

In a recent court hearing for the one-point-six trillion won scandal, a former official of the hedge fund testified that he gave 50 million won to then presidential senior secretary for political affairs Kang Ki-jung. While filing charges against the fund manager, Kang said he never received any money.