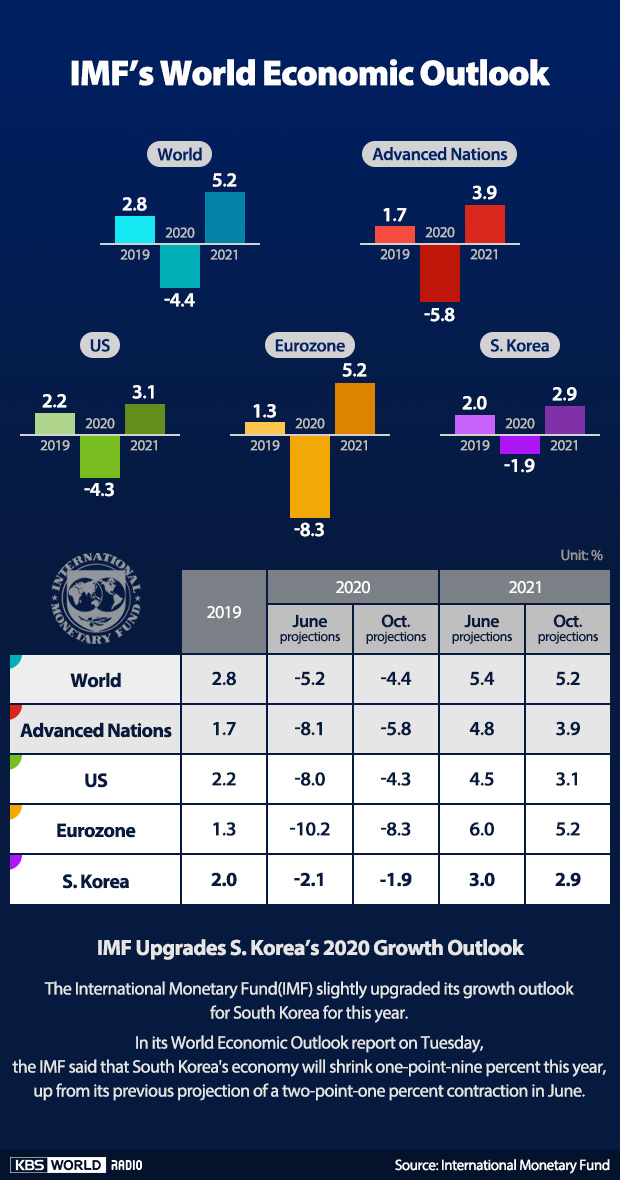 [Sound bite: Gita Gopinath - International Monetary Fund chief economist]
"Global growth is projected to be minus four-point-four percent, which is a small upgrade from June. This upgrade owes to somewhat less dire outcomes in the second quarter... "

Massive stimulus measures by governments around the globe kept economies from further worsening, according to the International Monetary Fund(IMF).

The IMF on Tuesday released its World Economic Outlook, upgrading the global growth forecast for this year by point-eight percentage points from its previous prediction in June.

IMF chief economist Gita Gopinath said the world is adapting to the pandemic.

[Sound bite: Gita Gopinath - International Monetary Fund chief economist]
"As a result of eased lockdowns and rapid deployment of both monetary and fiscal policy support, the world is coming back from the depths of its collapse in the peak of the crisis, which was the first half of this year. Employment levels have partially rebounded after having plummeted to historic lows. That said, this crisis is far from over."

The IMF predicted that the South Korean economy will shrink one-point-nine percent this year, an improvement of point-two percentage points from the June projection.

[Sound bite: Dr. Malhar Nabar - Chief of World Economic Studies division, IMF Research Dep't]
"There's been a strong, especially on the fiscal front, the four supplementary budgets now that have helped support domestic demand. There has also been an aggressive monetary policy response with the Bank of Korea that helped contain burrowing costs and provide liquidity into the system, and supported the provision of credit. All of that policy responses has helped improve prospects. The second factor is that the external environment, especially in the second half of the year, the outlook for Korea's exports have improved with the recovery of its trading partners."

Going forward, he said much is left up to the success of quarantine.

[Sound bite: Dr. Malhar Nabar - Chief of World Economic Studies division, IMF Research Dep't]
"Korea's response has been one that focused on testing, tracing and isolation. And they've avoided the stringent lockdowns that we've seen elsewhere, but at the same time, it's important to remain vigilant, continue to remain vigilant and make sure the health care system is adequately resourced. In dialogue with that, the economic policy focus should be on limiting persistent damages from this downturn that Korea is experiencing at the moment. And here, the three broad areas: One is to support households, affected households. The second is to help the affected firms, especially the SME sector. And the third is to ensure the smooth provision of credit throughout the economy."

The IMF believes that the ascent out of the pandemic-driven recession is likely to be long, uneven, and highly uncertain.