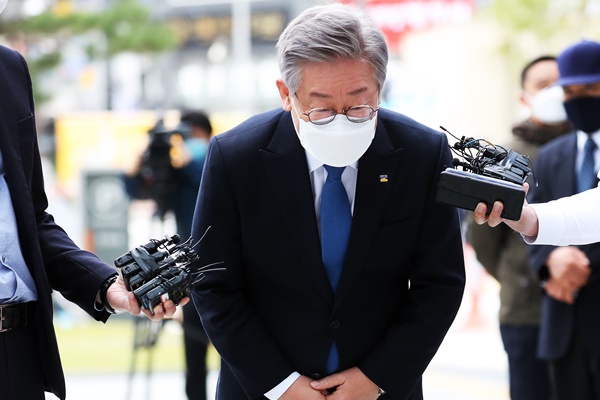 Gyeonggi Province Governor Lee Jae-myung was acquitted of violating the election law in a high-profile retrial that could have cost him his governorship.

In overturning its previous verdict on Friday, the Suwon High Court said Lee did not spread false information during televised debates ahead of the 2018 local elections, but merely responded to his rivals' questions.

In December 2018, Lee was indicted on four charges, including abuse of power and violating the election law, related to allegations that he used his position as the then-Seongnam City mayor to admit his elder brother into a mental institution against his will in 2012.

Lee denied his role in the forced hospitalization during televised debates in 2018.

While the Suwon District Court acquitted Lee of all charges in May 2019, an appeals court fined him three million won four months later for violating the election law, a ruling that could have stripped him of his governorship.

The Supreme Court, however, remanded the case to the appeals court in July this year, saying Lee had no intention of deliberately disseminating misinformation.

Following Friday's ruling, Lee expressed respect towards the court's judgment, which he said was "the last bastion of democracy."

Asked about the possibility of running in the next presidential election, he said he will do his best in the role given by the public.
Share
Print
List