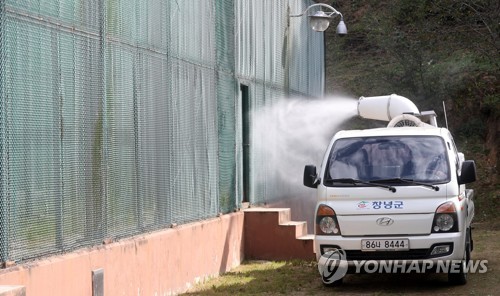 South Korea has confirmed a case of a highly pathogenic strain of avian influenza in wild bird droppings in South Chungcheong Province, marking the first such case in the country in 32 months.

The Ministry of Agriculture, Food and Rural Affairs said on Sunday that the virulent avian influenza strain of H5N8 was detected from a fecal sample collected from wild birds on Wednesday in Cheonan.

It marks the first virulent bird flue case since February 2018 when a highly pathogenic strain of H5N6 was detected in wild bird droppings at a stream in Asan in the same province.

Before the confirmation of the latest case, the ministry took a preemptive measure to issue a standstill for about 190 poultry farms within a ten kilometer radius from where the fecal sample was collected.

As the suspected case has been confirmed, the ministry decided to enforce stepped-up quarantine measures in the area, banning the movement of people and vehicles within a 500 meter radius from where the sample of the virus was discovered.
Share
Print
List