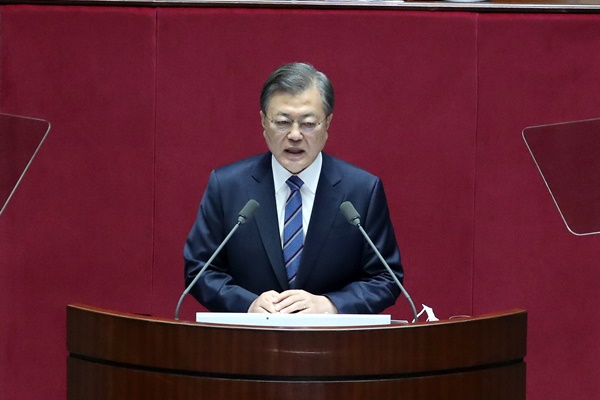 President Moon Jae-in said last month's shooting death of a fisheries official by North Korean troops near a western border island has reconfirmed the urgent need for a lasting peace regime on the Korean Peninsula.

In his budget policy speech at the National Assembly on Wednesday, Moon vowed his administration will act responsibly in finding the truth behind the official's death in a transparent manner.

The president also pledged to continue to push for dialogue with the North seeking denuclearization and lasting peace based on a strong national defense posture.

Stating that the peninsula's peace is the calling of the times, Moon stressed that the nation must overcome hurdles on that path, regardless of how long it takes.

Moon expressed hope that the two Koreas will seek coexistence as a community of life and safety that jointly overcomes infectious diseases and natural disasters.

The president's reiterated call for cross-border cooperation in health care and disaster management is considered an attempt at revitalizing dialogue with Pyongyang as the regime struggles in its fight against COVID-19 and in its typhoon recovery efforts.
Share
Print
List