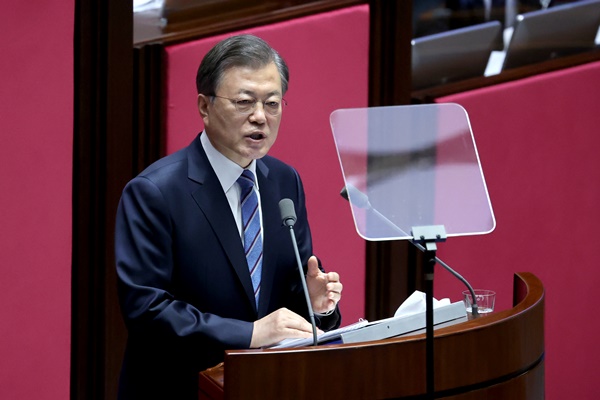 President Moon Jae-in urged the opposition party to stop delaying the launch of the Corruption Investigation Office for High-ranking Officials(CIO).

During his parliamentary speech on the state budget on Wednesday, Moon called for an acceleration of the agency's launch, stressing that it reflects the public's expectations for investigations without limits and reform of institutional power.

The launch of the agency has been delayed due to partisan strife as the main opposition People Power Party(PPP) deems the law on the agency to be unconstitutional.

The president also asked for the swift passage of bills on reforming the police and the state spy agency, as well as a package of fair economy bills involving revisions to the commercial, fair trade and financial group supervision laws.

Moon stressed the need for partisan cooperation amid crises rising from the COVID-19 pandemic, adding that the public expects the rival parties to come together in overcoming national crises.
Share
Print
List