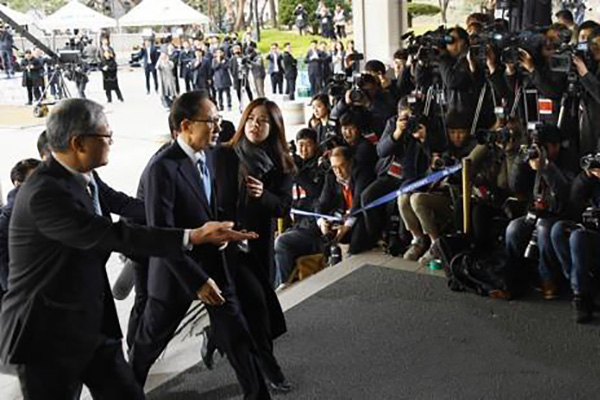 The ruling Democratic Party(DP) on Thursday demanded an apology from the major opposition People Power Party(PPP) over the conviction of the conservative ex-president on bribery and embezzlement charges.

In a written statement, DP spokesperson Shin Yeong-dae also called on the rival party to cooperate on the launch of the Corruption Investigation Office for High-ranking Officials(CIO) in order to not repeat past mistakes.

Criticizing the independent counsel that investigated the ex-president’s case for giving him a pass, the DP spokesman labeled it an example of a special investigation being abused politically and vowed the ruling party’s efforts to not repeat the corruption of power.

Refraining from direct criticism against the former president, the PPP instead called the ruling the latest manifestation of an unfortunate history in the nation in which former top national leaders faced criminal punishment.

PPP spokesperson Bae June-young also said it is not the time to dwell on individuals’ faults but rather to reflect on the constitutional system that gives too much power to the president and come up with an alternative.
Share
Print
List