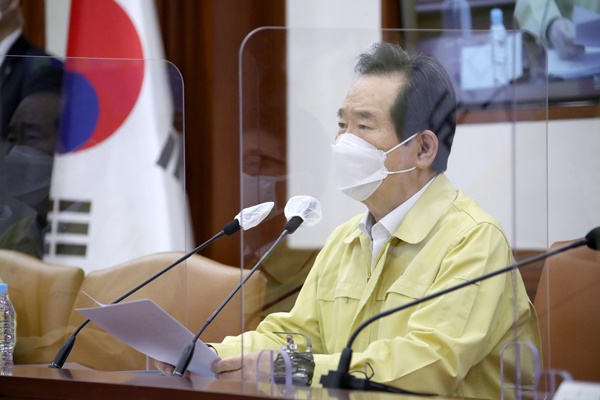 South Korea has decided to raise social distancing rules in the greater Seoul region by one notch to Level One-point-Five amid a spike in COVID-19 infections.

The government announced the decision after a coronavirus meeting presided over by Prime Minister Chung Sye-kyun on Tuesday morning.

The new distancing guidelines will be enforced for Seoul and Gyeonggi Province from Thursday while they will be put in place in Incheon from Monday.

The Incheon Metropolitan Government had asked for several additional days of preparations while relatively small outbreaks in the western airport city were also factored into the decision. Two island counties  in the city, Ganghwa and Onjin, will be also exempt from the upgraded rules.

The government initially considered raising the social distancing level for Gangwon Province as well, but decided to impose it on the metro area first.

Under the country's new five-tier distancing scheme, Level One-point-Five rules are imposed when the number of new domestically transmitted cases per day surpasses 100 in the greater Seoul area and ten in Gangwon Province.

The average daily number of new local infections in the Seoul metro area surpassed 100 for four straight days recently, while the figure for Gangwon posted around 20 for the same period.

Under Level One-point-Five, multiuse and high-risk facilities including clubs, bars and restaurants are subject to stricter distancing rules. Professional sports teams will be allowed to operate stadiums at 30 percent capacity.
Share
Print
List