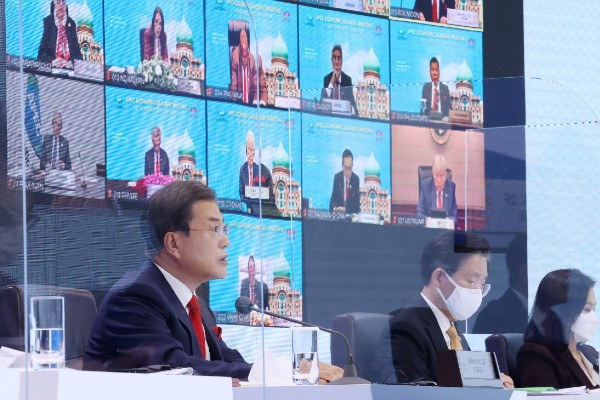 Anchor: President Moon Jae-in proposed to fellow Asia-Pacific Economic Cooperation(APEC) leaders that they actively discuss measures to facilitate the movement of essential personnel despite the COVID-19 outbreak and strengthen the multilateral trade system.  He also shared Seoul’s experiences in the fight against the virus and humanitarian assistance, as well as reaffirmed the country’s commitment to share this with the region and the world.
Moon Gwang-lip reports.

[Sound bite: President Moon Jae-in (Korean-English translation)]
“After thirty years of dreaming about an economic community, APEC has grown to account for 60 percent of global GDP and 50 percent of global trade.”
“COVID-19 has changed many things but shall not change the dream that we have pursued. It is time for APEC to exert the power of solidarity once again to overcome the crisis.”

Moon said strengthening multilateral trade systems will help speedup economic recovery in the region. He said measures to facilitate travel by essential workers also need to be actively discussed. He added that South Korea is minimizing the pandemic’s impact on the economy by opting for continued exchanges over closing borders and said future growth of the Asia-Pacific depends on expanded balance in which everyone gains from free trade.

He also emphasized the need for inclusive cooperation that will prevent the pandemic-induced crisis from worsening inequality and introduced Seoul’s related efforts, including the adoption of the Korean New Deal that supports stronger job security and a social safety net as a new national development strategy.

The South Korean leader also shared how his country provided 100 million dollars in humanitarian assistance and efforts to share quarantine know-how and products with the world.

During the virtual summit, Moon also suggested the regional bloc explore a balanced integration between the digital economy and green economy.

Sharing Seoul’s efforts to promote the 5G ecosystem innovation project in the region via the APEC Digital Innovation Fund, he encouraged the member states to actively participate in a workshop on the digital economy and global value chains to be hosted by South Korea next year.

Regarding APEC’s new 20-year vision set to be adopted during the latest summit, Moon assessed that it properly reflected key agenda items, such as free trade investment, innovation, the digital economy and inclusive growth, and said it will be a guiding post for joint prosperity of the region.