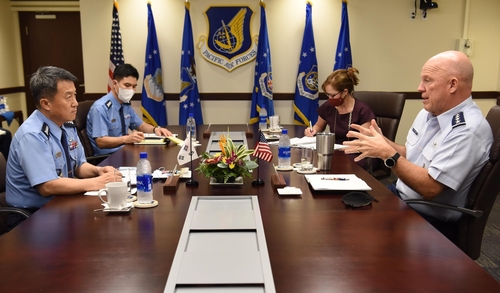 South Korea has proposed setting up a regular consultation body between its Air Force and the United States Space Force.

Seoul's Air Force said on Sunday that Air Force Chief of Staff Lee Seong-yong made the proposal during talks with U.S. chief of space operations Gen. John Raymond on Thursday in Hawaii.

In addition, Lee reportedly asked the United States to expand the number of South Korean airmen taking part in the U.S. space operations education and training.

The Air Force said Raymond expressed understanding on the need for a regular communications channel and pledged to strengthen the two countries' partnership in the space field.

The meeting marked Lee's first bilateral talks with Raymond, the first chief of the U.S. Space Force, since its establishment in December last year.

Lee visited the U.S. Pacific Air Forces Command in Hawaii at the request of Raymond for a five-day trip that ended Sunday in order to take part in the Chief of Space Operations and Air Chiefs Visit event hosted by the U.S. military.
Share
Print
List