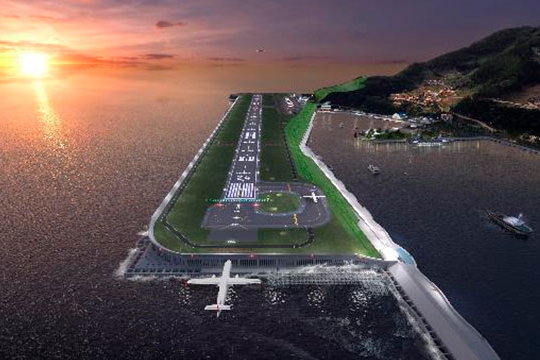 Construction has begun on an airport in Ulleung Island in North Gyeongsang Province, which will cut down travel time from Seoul from the current seven hours to just one.

Ulleong Island is located in the East Sea, some 120 kilometers from mainland South Korea. The Ulleong Country administrative area includes the Dokdo Islets.

Once finished, Ulleung Airport will mainly service small aircraft with fewer than 50 seats. Local authorities expect it will increase annual tourist numbers to the remote island to one million, likely boosting the number of people taking sightseeing tours to the Dokdo Islets as well.

The Seoul government and Ulleung county will invest over 660 billion won by 2025 to build a one-point-two kilometer airstrip, passenger terminal and other facilities and amenities.

Feasibility surveys on the Ulleung airport first began in 2013 after which the design plan was announced in 2017 and the builder selected last year.