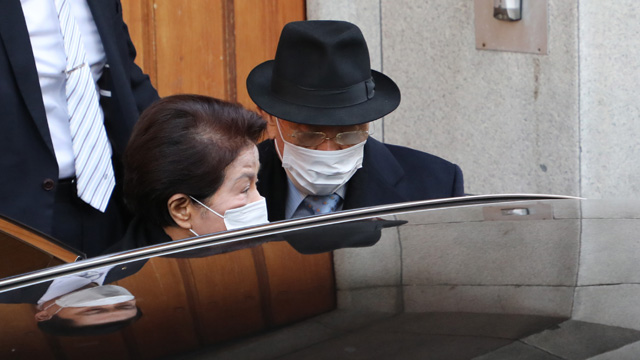 Former President Chun Doo-hwan has departed for the southwestern city of Gwangju as a local court is set to rule on his defamation charges linked to the 1980 Gwangju pro-democracy uprising.

Chun left his residence in western Seoul at 8:42 a.m. Monday, accompanied by his wife, Lee Soon-ja, and headed for Gwangju.

The Gwangju District Court will hold a sentencing hearing at 2 p.m. in a controversial defamation case. Prosecutors are seeking an 18-month sentence for the former president.

Chun was indicted in May 2018 for allegedly making slanderous statements against a late activist's eyewitness accounts of the bloody military suppression of pro-democracy protesters.

In his 2017 memoir, Chun labeled the Catholic priest, Cho Bi-oh, a "liar" and "Satan" for testifying that troops in helicopters fired machine guns at civilians during the uprising.
Share
Print
List