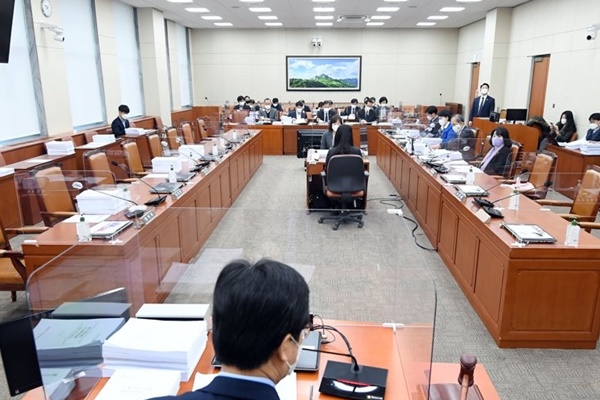 A parliamentary committee has passed revisions to the nation's labor laws, ahead of Seoul's planned ratification of key International Labor Organization(ILO) conventions.

The trio of bills passed early Wednesday by the Committee on Environment and Labor are meant to protect workers' rights in employment, industrial accidents and irregular work.

While labor groups generally welcome legislation aimed at giving more power to workers, the Korean Confederation of Trade Unions(KCTU), one of the nation's largest umbrella unions, had been protesting clauses that would ban the assembly of striking workers at major production facilities and block the entry of rallying non-employees from company grounds.

Committee members from the main opposition People Power Party boycotted the session on Tuesday in protest of the ruling party's earlier railroading of revisions to a law that effectively scrapped the PPP's veto power on the selection of final candidates to head a new anti-corruption investigative body.

The changes to the labor bills were made by ruling Democratic Party lawmakers after all-night deliberations without their PPP counterparts. The bills move on to the National Assembly's plenary session for a final vote.
Share
Print
List