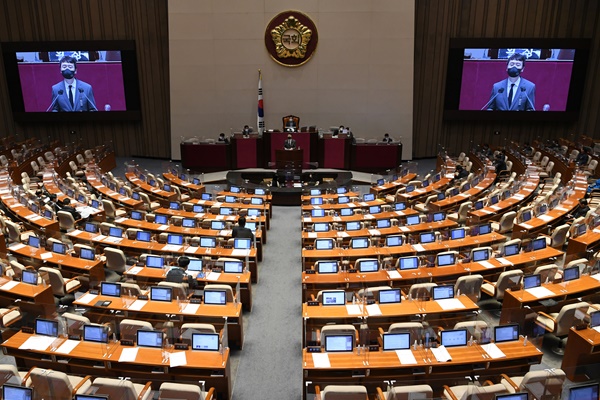 Anchor: At the National Assembly, the main opposition People Power Party(PPP) pushes on with its filibuster for a second day, making their case against a bill that would strip the National Intelligence Service of its domestic investigative powers.
As Choi You Sun explains the marathon debates could potentially extend to early January.

Report: The main opposition People Power Party(PPP) on Friday continued for the second straight day a filibuster to block passage of a bill on reforming the state spy agency.

The bill to revise the law on the National Intelligence Service(NIS) was put forth by the ruling Democratic Party(DP). It aims to strip the spy agency of the power to investigate South Korean citizens suspected of spying for North Korea, instead transferring that authority to police three years from now. The NIS would redirect its focus to intelligence-gathering on overseas sources, including North Korea.

The PPP has cast doubts over whether the police would have the skills and experience to investigate espionage suspects, arguing that the revised bill would disable the NIS from fully utilizing its assets.

To that, the DP counters the spy agency could pass on a curated set of relevant intelligence from its wide database. It holds that it wants to stem human rights violations in the NIS' purported anti-communist probes of the past.

The ruling party is able to limit the opposition party's filibuster to 24 hours with support from three-fifths of incumbent lawmakers, but it opted not to immediately take that route.

While the DP said it will respect the opposition's right to speak, the party is also likely aiming to deflect criticism that it had destroyed parliamentary democracy in rushing through revisions to another bill, on the Corruption Investigation Office for High-Ranking Officials(CIO).

Without an intervention, the PPP is able to carry on with the marathon debates until the end of the current extraordinary session on January 8. Over 50 of the party's freshman lawmakers are in line to take part.