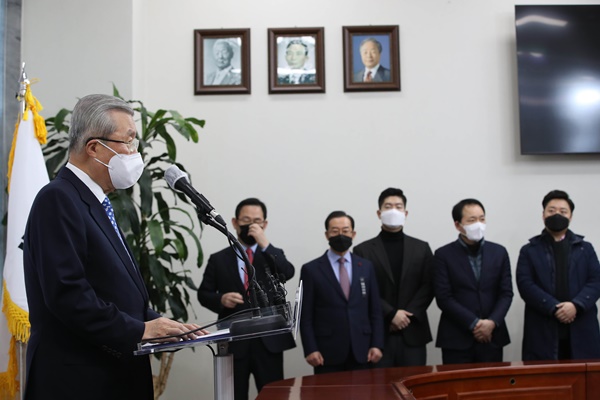 The head of the main opposition People Power Party(PPP) issued a public apology over two former presidents affiliated with the conservative party, both of whom are serving time in prison for corruption.

At a press conference on Tuesday, PPP interim chief Kim Chong-in said his party takes responsibility for failing to fulfill its duties to lead the nation as the then-ruling party and prevent misconduct by the ruling power.

Kim said instead of having remorse and looking back on its shortcomings, the conservative party colluded to maintain power and failed to unite. It then became divided in facing crisis.

The PPP leader then sincerely apologized for disappointing the public.

The formal apology from the leader of the conservative main opposition party in regards to former presidents Lee Myung-bak and Park Geun-hye is the first of its kind and comes four years after the National Assembly passed the impeachment bill against Park.

Kim also criticized the Moon Jae-in administration and the ruling Democratic Party(DP) for causing a regression of democracy and constitutional government, adding his party is partly to blame.

The opposition leader then vowed that his party will reflect on the past and turn over a new leaf.
Share
Print
List