Moon Highlights Significance of CIO in Keeping Prosecution in Check 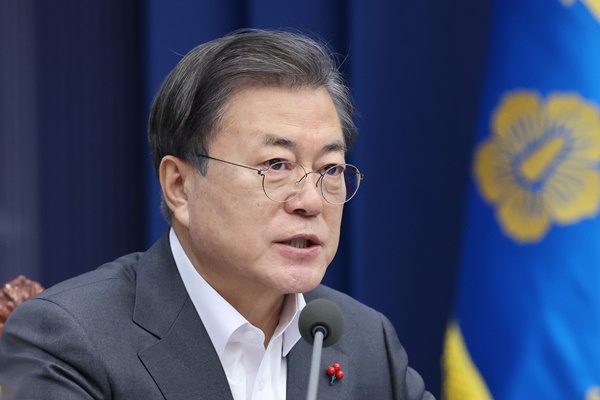 President Moon Jae-in highlighted the significance of the soon-to-be-launched Corruption Investigation Office for High-ranking Officials(CIO), expecting it to serve as a systemic tool to democratically keep the prosecution in check.

At a Cabinet meeting on Tuesday, Moon said the CIO is at the core of his administration's envisioned reforms of institutions of power, as it will be able to hold the state investigative agency accountable for internal corruption and other wrongdoings.

Moon's remarks come as the Cabinet approved the promulgation of revisions to the CIO law on Tuesday, after the revision bill passed the National Assembly amid strong protests from the opposition party.

The CIO will be tasked with investigating corruption among senior government officials, including prosecutors.

The president refuted the opposition's criticism that the CIO would allow a dictatorship, saying had the agency existed, it would have prevented the influence-peddling scandal during the previous Park Geun-hye administration.

He then called on parties at both ends of the political aisle to join efforts to allow the CIO to fulfill its duty to eradicate corruption and achieve social transparency.
Share
Print
List