Moon: It's Not Time Yet to Pardon 2 Ex-Presidents 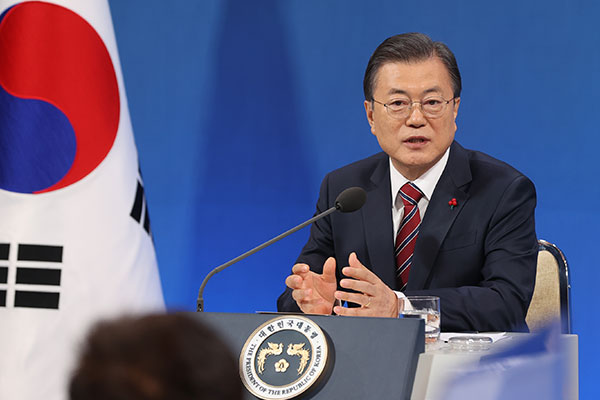 President Moon Jae-in says it is not the time yet to speak of pardons of former Presidents Lee Myung-bak and Park Geun-hye, but hinted at its possibility later.

In a televised New Year’s media conference at the presidential office on Monday, Moon said it is unfortunate for the nation to see two former presidents incarcerated, adding that their alleged health issues and advanced ages are concerning.

The president, however, said that still it is not the time to speak about pardons of his two predecessors, who are in prison after being convicted of corruption and other charges.

The possibility of presidential pardons for the two ex-presidents has been speculated on since ruling Democratic Party(DP) leader Lee Nak-yon said early this month that he would suggest it to Moon in the name of national unity.

Moon said that trial procedures on the two former presidents have been just finished, adding huge scandals and corruptions involving abuse of power that caused tremendous national harms and huge public pains have been confirmed.

Noting the court's sentences reflect the gravity of the matters, Moon said that no politician, including the president, has the right to speak of pardons in the wake of the verdicts.

He also took issue with some groups who are demanding pardons while denying the past wrongdoings by the two ex-presidents and court decisions, saying such voices are incompatible with the commonsense of the public and himself.

However, Moon acknowledged that there are many supporters for the two ex-presidents and that it is worth listening to calls for national unity by means of pardons, adding a deeper deliberation on the issue will be made at an appropriate time.

The president still stressed public consensus on discussing the issue, saying without it pardons will not help realize national unity and rather deepen division and hurt integration.
Share
Print
List