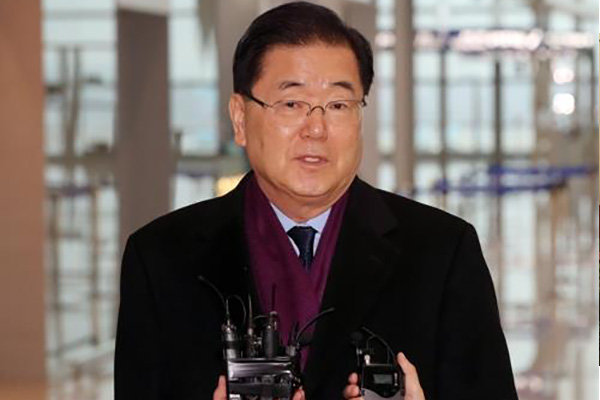 The presidential office on Wednesday announced a three-person Cabinet reshuffle, including the replacement of Foreign Minister Kang Kyung-wha with Chung.

[Sound bite: Chung Man-ho, Presidential Senior Secretary for Public Affairs (Korean/English translation)]
"Foreign Minister-nominee Chung Eui-yong is a top expert who has dedicated his life to the field of foreign affairs and security. While working as the Moon Jae-in administration's National Security Office Director for three years, he discussed and coordinated every pending issue between South Korea and the U.S., and was deeply involved in the North-U.S. negotiations regarding the peace process on the Korean Peninsula and major policies to denuclearize the region. He is assessed to have a deep understanding of and insight into the issues of foreign affairs and security."

Kang, the only inaugural minister left on the Moon Cabinet, had been expected to stay put for the remainder of Moon’s term.

The surprise decision, diplomatic observers say, is to respond to possible changes of U.S. policies on North Korea under the imminent launch of the Joe Biden administration amid stalled denuclearization talks.

During his Senate confirmation hearing on Tuesday, U.S. Secretary of State-nominee Antony Blinken indicated significant changes, saying the Biden administration plans to review the country's entire approach and policy toward the North.

The former deputy secretary of state said the new administration will look into options to increase pressure on the regime to return to the negotiating table but ensured these efforts will start with consulting closely with U.S. allies and partners, particularly with South Korea and Japan.

While working as the National Security Office director for over three years since the launch of the Moon administration, Chung handled various issues concerning North Korea and the U.S. and contributed to the inter-Korean summits in 2018 as Moon's special envoy to Pyongyang.

He was replaced by former National Intelligence Service chief Suh Hoon in July, but has continuously been involved in security issues since then as a special presidential adviser on foreign affairs and security.

[Sound bite: Chung Man-ho, Presidential Senior Secretary for Public Affairs (Korean/English translation)]
"As the Joe Biden administration in the U.S. is set to be launched, he will strengthen the South Korea-U.S. alliance based on his expertise on foreign affairs and knowledge and understanding of related issues and policies. He will also resolve issues involving major countries, including China, Japan, Russia and the European Union. He is expected to help settle and develop the Moon Jae-in administration's key policies, the peace process on the Korean Peninsula, the New Southern and Northern policies, and further broaden the horizon and status of South Korea's diplomacy."

In a statement delivered through the Foreign Ministry, Chung vowed to do his best so that the Moon administration's foreign policies bear fruit and the peace process on the Korean Peninsula takes root.

He said he considers the opportunity to assume the foreign minister post as his last chance to serve the nation.

SMEs Minister Park Young-sun offered her resignation earlier in the day in an apparent move to run for Seoul mayor in April.

Park, who served as a lawmaker for four terms with the DP, is considered among the leading contenders for the post left vacated after the death of DP-affiliated Park Won-soon, along with minor opposition People's Party head Ahn Cheol-soo.