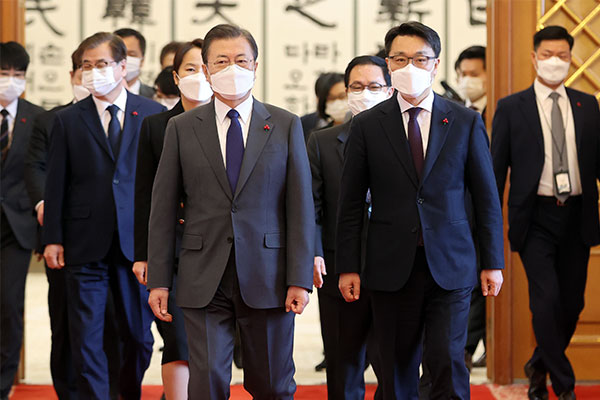 President Moon Jae-in presented on Thursday a letter of appointment to Kim Jin-wook, the inaugural chief of the Corruption Investigation Office for High-ranking Officials(CIO).

Presidential spokesperson Kang Min-seok said after presenting the letter, Moon said it is key for the agency to steadily gain the public’s trust.

In particular, the president stressed the need for the agency to be politically neutral and independent from existing inspection organizations.

He asked Kim to lead the organization with a sense of duty, as it will provide the nation with a fairer and more corrupt-free society. It will safeguard transparency and the integrity of high-ranking public officials.

Kim thanked the president for the appointment, adding that he believes once the CIO gains the public’s trust, the prosecution’s erroneous practices in carrying out investigations will see change.
Share
Print
List