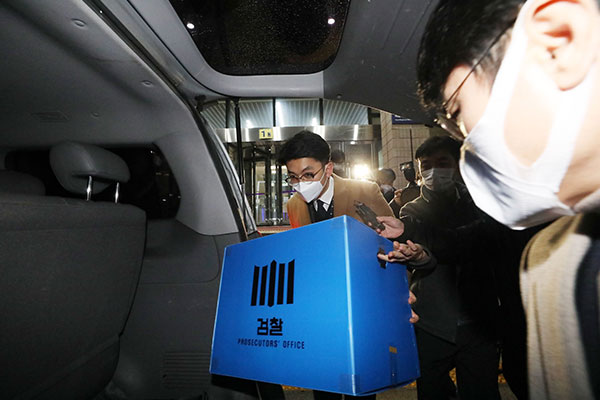 Prosecutors have continued a raid at the Justice Ministry as they investigate an alleged violation in issuing a travel ban against former Vice Justice Minister Kim Hak-ui in 2019.

On Friday, the Suwon District Prosecutors' Office resumed the search for a second day at the ministry and the Korea Immigration Service at Incheon International Airport.

A day earlier, the prosecution also raided the planning and coordination department at the Supreme Prosecutors' Office(SPO) and the current office and residence of the prosecutor who sat on the SPO's fact-finding panel at the time of the ban.

Kim, who briefly held the vice minister post in 2013, was stopped from leaving the country in March 2019 amid a fresh investigation into alleged sexual favors he received. The ministry had issued an "urgent" overseas travel ban.

The former vice minister was convicted of bribery and sentenced to two-and-a-half years in prison, a fine of five million won and a forfeit of 43 million won. He was acquitted of the sexual favor charge as the statute of limitations expired.
Share
Print
List