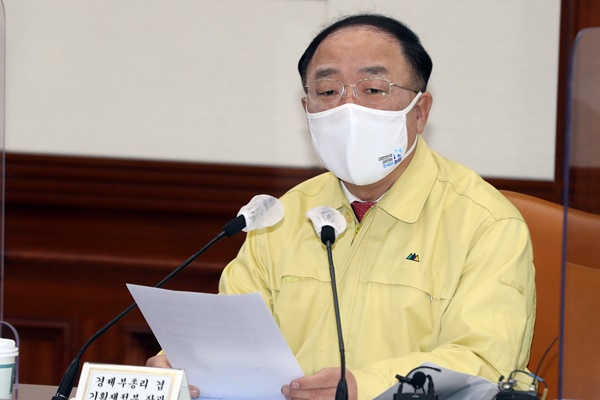 Finance Minister Hong Nam-ki has promised to review calls for legislative steps to compensate business owners who suffered losses due to COVID-19 restrictions.

In a Facebook post on Friday that is seen as a response to Prime Minister Chung Sye-gyun’s earlier order to review such steps, Hong also vowed to keep the public informed of areas where such compensation isn’t feasible.

The finance minister's remarks on Friday are viewed as an effort to ease controversy caused by Vice Finance Minister Kim Yong-beom's expressed reluctance to the idea when he said that such legal measures are not common overseas.

Hong said an internal review is under way to respond in one way or another and there are many aspects to consider since such a measure is uncharted territory. Such aspects include standards on selecting recipients and how to secure funding.

But Hong added that while there is no dispute of the need for compensation to businesses, state finances are not bottomless. Stressing that fiscal conditions and revenue levels are also important in policy making, he warned they must watch how quickly national debt increases, rather than its volume.
Share
Print
List