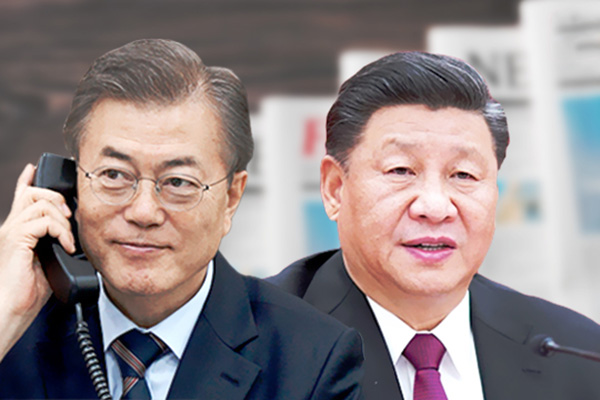 In a written briefing, presidential spokesperson Kang Min-seok said the two leaders confirmed their mutual understanding during phone talks that lasted for 40 minutes on Tuesday evening.

The two nations had pushed for Xi's visit to South Korea last year but planning had been interrupted by the COVID-19 pandemic.

Moon told Xi he expects the two nations will resume communication on the trip once the COVID-19 situation is stabilized.

Xi thanked Moon for the invitation and said he looks forward to visiting South Korea as soon as conditions allow.

Xi said China supports dialogue between the two Koreas as well as between North Korea and the U.S., stressing Seoul's role toward a political solution to peninsula issues.

During their first phone talks in eight months, the two leaders also agreed to promote high-level visits and people-to-people exchanges ahead of the 30th anniversary of their established diplomatic relations in 2022.

The top office said that Moon and Xi wished to declare both 2021 and 2022 the Years of Cultural Exchange between their nations and produce a successful result.
Share
Print
List