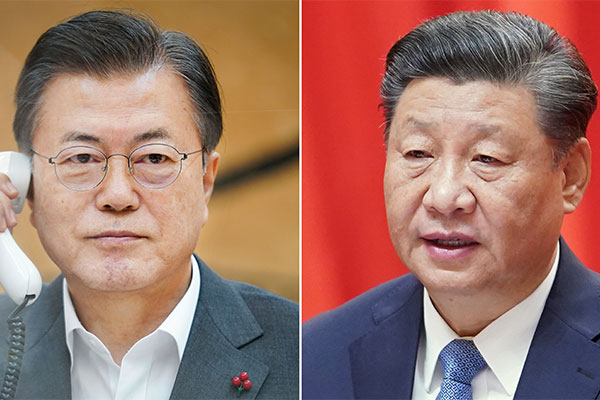 During phone talks with President Moon one day earlier, it said Xi also noted it would be in the joint interest of South Korea and China to achieve the North's denuclearization.

When Moon sought Beijing's constructive role in seeking a resolution to the nuclear issue through dialogue, Xi expressed support for dialogue between the two Koreas, as well as between Pyongyang and Washington.

Moon also expressed hope for the two sides to work towards an early resumption of a trilateral summit involving Japan, which was delayed last year due to the COVID-19 pandemic. Xi agreed to enhance cooperation with Seoul for South Korea's hosting of the three-nation meeting.

The two leaders together assessed that the bilateral cooperation in COVID-19 quarantine has been effective, and Xi endorsed Moon's envisioned Northeast Asia quarantine and health care partnership that would aim to involve the two Koreas, China Japan and Mongolia.

The two leaders also spoke on their respective country's consideration to join the Comprehensive and Progressive Agreement for Trans-Pacific Partnership(CPTPP), an Obama-era trade initiative that had excluded China but that the U.S. ultimately pulled out of under the Trump administration. Xi and Moon agreed to continue consultations over their possible membership of the currently eleven-nation trade bloc that the Biden administration is known to be considering as well.
Share
Print
List