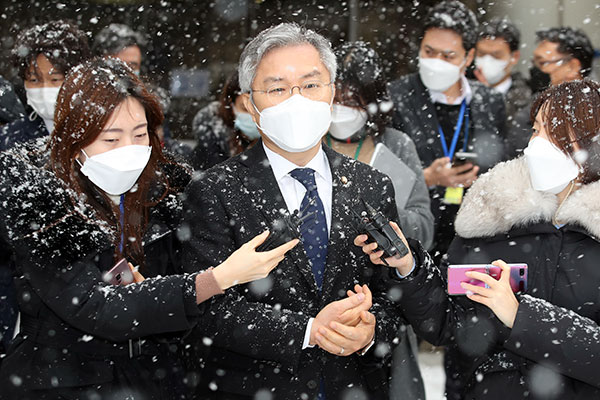 The head of the minor opposition Open Minjoo Party was given a suspended prison sentence for drawing up a false internship document for the son of former Justice Minister Cho Kuk.

The Seoul Central District Court on Thursday sentenced Rep. Choe Kang-wook to eight months in prison, suspended for two years, on charges of obstruction of duty. Under the law, an elected official is stripped of his or her post if sentenced to imprisonment for a criminal offense.

Choe was indicted in January last year for allegedly issuing a false internship confirmation document for Cho's son in October 2017, while he was working at a law firm. The document helped Cho's son get accepted to graduate schools at prestigious Yonsei University and Korea University.

While Choe claimed innocence, saying the ex-minister's son did complete an internship at his law firm, the court decided otherwise based on testimonies from firm representatives.

The court assessed that the document may have pushed the schools to mistakenly believe certain parts of the son's experience, and that the defendant was likely aware that it would be submitted in the admissions process.