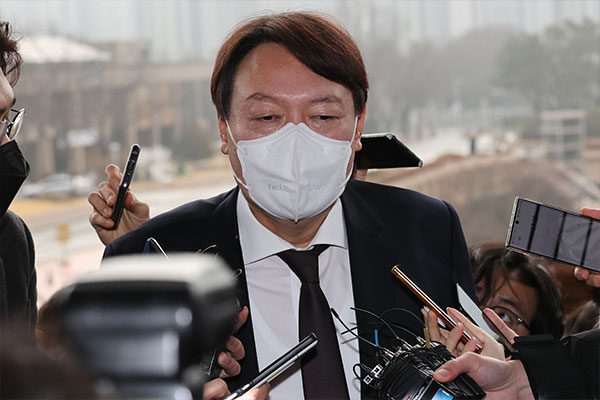 Anchor: Prosecutor General Yoon Seok-youl has announced his intent to resign, reiterating his opposition to the ruling camp's law enforcement reform. Speaking to reporters in front of the Supreme Prosecutors’ Office in Seoul on Thursday, he said the spirit of the constitution is being torn apart and that he has no choice but to step down. He added that he will continue to work to safeguard the liberal democracy of the country, sparking speculations that he might have greater ambitions.
Kim Bum-soo has more.

Report: Prosecutor-General Yoon Seok-youl has consistently had conflicts with the ruling camp over its law enforcement reform campaign and his much publicized feuds with the Moon Jae-in administration’s justice ministers earned him a controversial potential for president.

Announcing his resignation on Thursday with some four months left in his term, the 60-year old career investigator again slammed the ruling party's blueprint for a new agency that would essentially strip away investigative powers from the prosecution.

[Sound bite: Prosecutor-General Yoon Seok-youl (Korean-English translation)]
"I am planning on resigning today. The spirit of our constitution and our legal-governance that maintain this country are now falling apart. And the people of Korea will be the ones to pay the price. It is difficult for me to watch the collapse of common sense and justice that our society has formulated over the years. My role at the prosecution ends here."

Yoon in 2019 carried out an unsparing investigation into then Justice Minister Cho Kuk and his wife over corruption, forgery and obstruction of justice among other charges, pushing him to resign in just over a month after his appointment.

The chief prosecutor then clashed with Cho’s successor Choo Mi-ae, who also stepped down after a court nullified her suspension of Yoon’s leadership.

[Sound bite: Prosecutor-General Yoon Seok-youl (Korean-English translation)]
"Nevertheless, I will do my best to safeguard the liberal democracy and to protect the people, as I have always done. I would like to thank those who supported me and also those who sharply criticized me. Thank you."

Ahead of the presidential election scheduled just about a year later, main opposition People Power Party chief Kim Chong-in recently told a local newspaper that a decisive moment would come for Yoon this month. Opinion polls have consistently suggested that the Korean public identifies Yoon as one of the major contenders for the conservative camp.