Yoon Defends His Job in Farewell Message as Top Prosecutor 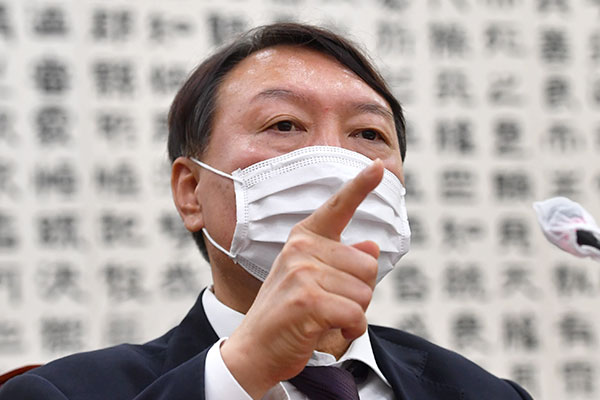 Prosecutor General Yoon Seok-youl has defended himself against the criticism that he was loyal to the prosecution, saying he has worked to safeguard justice and common sense during his stint.

Yoon shared the message in his farewell note sent to the members of the prosecution on Thursday, hours after he expressed his intent to step down to protest the ruling bloc’s bid to further restrict the prosecution’s right to investigate.

Apparently refuting the criticism that he hindered the government’s prosecution reform drive by clinging to the legal enforcement agency’s vested interests, the top prosecutor said his service was not to protect the prosecution’s rights but defend justice and common sense in society, as well as democracy and the rule of law.

Noting that he was stepping down from the post that he had fought so hard to defend, Yoon still called his resignation his last duty as defined by nation's Constitution to defend democracy and the rule of law.

He also repeated his criticism against the ruling Democratic Party’s drive to create a separate investigative agency on serious crimes, saying the move must be drawing anger and concerns from his fellow prosecutors. He said he feels regret and a deep sense of responsibility over the matter.

However, Yoon urged prosecutors not to be shaken by what he described as grave and urgent situations and focus only on serving the public, adding that he is sorry for not being with them to the end.
Share
Print
List