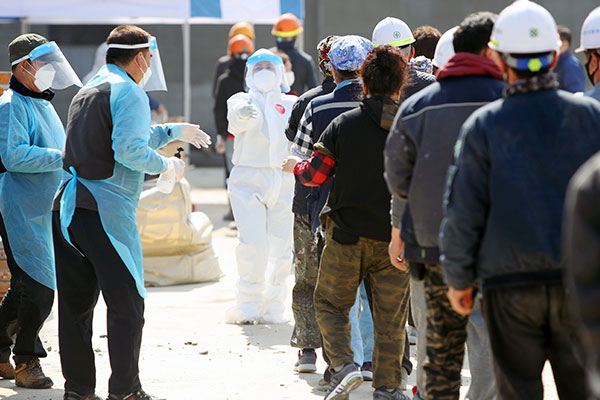 Anchor: Administrative orders by the Seoul city and Gyeonggi provincial governments making COVID-19 testing mandatory for foreign workers has sparked concerns of human rights violations. The Seoul city government has defended the move, saying it’s aimed at securing the safety and health of foreigners and blocking the spread of community infections.
Our Bae Joo-yon has more.

Report: The Seoul Metropolitan Government began implementing on Wednesday an administrative order that makes COVID-19 testing mandatory for foreign workers in the city through March 31, including undocumented foreigners.

During the two-week period, business owners in Seoul who employ one or more foreigners are required to have the workers and themselves tested for the virus.

Those who do not follow the administrative order could face fines of up to two million won.

The move comes nine days after Gyeonggi Province implemented the same order which will be in place through next Monday.

The moves have sparked controversy that they are discriminatory and violate human rights.

Park Yoo-mi, who heads the Citizens’ Health Bureau in the Seoul Metropolitan Government, expressed hope that the public would regard the latest move as an active measure aimed at securing the safety of all people.

Her remarks have failed to quell the latest controversy, with professor Lee Jae-gap of Hallym University Medical Center, an infectious disease expert, saying he cannot understand why the city government has engaged in such an act that goes against human rights.

Some have called on Seoul to withdraw the administrative order, including ruling Democratic Party lawmaker Lee Sang-min, who said on his social media that the mandatory testing is a human rights violation that’s disgraceful.
Bae Joo-yon, KBS World Radio News.
Share
Print
List