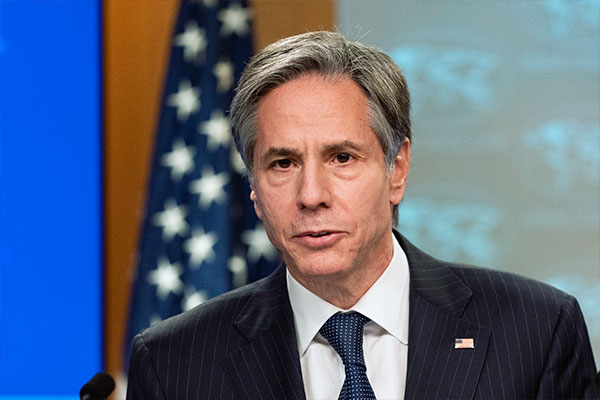 Anchor: KBS recently sat down with U.S. Secretary of State Antony Blinken and discussed contentious matters concerning the Korean Peninsula, including the North Korea nuclear issue. While remaining cautious on commenting about the U.S.’ North Korea policy, Blinken stressed that the North’s human rights situation is one of the most egregious around the world.
Our Bae Joo-yon has more.

Report: KBS sat down for an interview on Thursday with U.S. Secretary of State Antony Blinken, who visited South Korea on his first overseas trip under the Joe Biden administration.

When asked whether Washington believes the U.S.-North Korea dialogue could be put off a little longer, Blinken stressed that President Biden is intent on placing the focus of foreign policy on human rights and democracy.

[Sound bite: U.S. Secretary of State Antony Blinken (English)]
“President Biden has been very clear from day one that he was determined to put human rights and democracy back at the center of American foreign policy. North Korea, unfortunately, is one of the most egregious human rights situations that we know around the world.”

His comments suggest that the U.S. has no intention of making concessions on the human rights front with the North, even if that could delay bilateral dialogue.

Blinken was also asked to comment on North Korea’s First Vice Foreign Minister Choe Son-hui saying that Pyongyang will continue to ignore all contact from the United States unless Washington withdraws its hostile policies.

[Sound bite: U.S. Secretary of State Antony Blinken, (English)]
“I’ve heard what was said in Pyongyang but the voices I’m interested in listening to right now are those of our close partners as we conduct the review.”

On whether the Biden administration plans to continue or terminate an agreement that the U.S. signed with the North during the 2018 Singapore summit, Blinken only reiterated that the administration is reviewing North Korea policies.

[Sound bite: U.S. Secretary of State Antony Blinken, (English)]
“We’re conducting that review, listening very carefully to our partners here in South Korea to make sure that we’re fully informed by their views, their perspectives.”

Blinken also spoke about the importance of cooperation among South Korea, the U.S. and Japan to address the North’s nuclear issue.

[Sound bite: U.S. Secretary of State Antony Blinken, (English)]
“Whether it’s the pandemic, whether it’s climate change, whether it’s dealing with the challenges posed by emerging technologies, I could go on and on. But the bottom line is what we have in common, we’ve strongly encouraged in the past and continue to encourage our close friends and partners, Korea and Japan, to try to work through and address these issues in a spirit of reconciliation.”

[Sound bite: U.S. Secretary of State Antony Blinken, (English)]
“I’m not aware of the paper that you’re referring to but what I can tell you is that we have long said that sexual exploitation of women is an egregious violation of human rights, including by the Japanese military in World War Two.”
Bae Joo-yon, KBS World Radio News.
Share
Print
List