Population in S. Korea Continues to Fall in Q1 of 2021 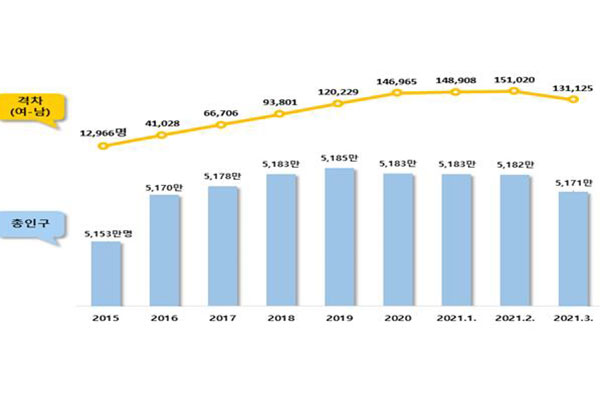 The population in South Korea, which declined naturally for the first time last year, has continued to drop during the first three months of 2021.

According to the Interior Ministry on Wednesday, the country's registered population stood at 51-point-71 million as of March 31, down by 123-thousand-118, or point-24 percent, from December 31, 2020.

Natural factors such as lower births and higher deaths attributed to ten-thousand-370 of that number. However, 116-thousand-177 people were removed from the population count in the first quarter after not registering a residence for over five years.

The number of youths and children continued to decrease, while that of seniors continued to rise, with those older than 65 taking up 16-point-six percent of the total population.

The number of households continued to expand, up point-28 percent from three months earlier, to total a record 23-point-16 million.

The average number of people per household, however, fell to a record low of two-point-23. The percentage of households with four or more people, on the other hand, dropped below 20 percent for the first time.
Share
Print
List