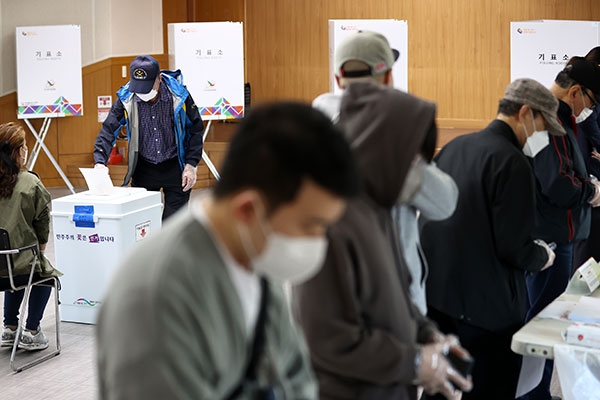 Turnout for the by-elections being held nationwide on Wednesday stood at 47-point-three percent as of 5 p.m.

Among 12-point-16 million eligible voters, five-point-75 million people had cast their ballots as of 5 p.m. The figure includes the two-point-five million voters who had exercised their voting rights during last week's two-day early voting.

While the early voting on Friday and Saturday had posted a record high turnout of 20-point-54 percent for by-elections, Wednesday’s voting rate so far is lower than the previous regional elections in 2018, which had logged a turnout of 56-point-one as of 5 p.m.

In Seoul, where votes are being cast to choose its first new mayor in 10 years, 49-point-seven percent of potential voters, or four-point-19 million citizens, have cast their ballots as of 5 p.m. Turnout for the mayoral by-election in Busan stood at 44-point-six percent as of 5 p.m.
Share
Print
List