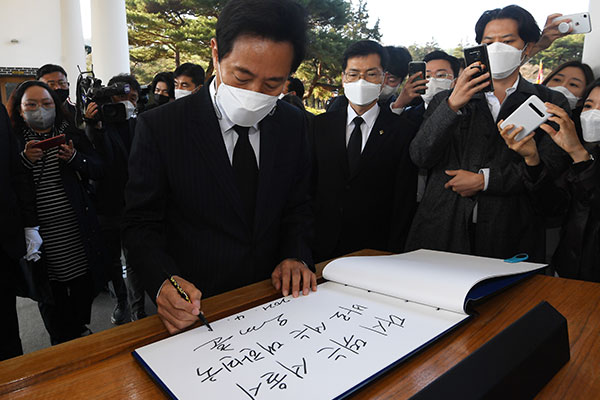 Report: It was a rough night for the ruling Democratic Party(DP), which lost the mayorships of Seoul and Busan to its rival People Power Party(PPP) in by-elections that were considered a referendum on President Moon Jae-in.

According to the final tally by the National Election Commission(NEC) early Thursday, the PPP’s Oh Se-hoon garnered 57-point-five percent of the votes cast in the capital city over the DP's former startups minister Park Young-sun, who received 39-point-18 percent.

The conservative party candidate scored more votes than Park in all 25 districts in Seoul, a complete turnaround from the local elections three years ago when the DP colored the map blue.

It was a sweet victory for Oh, who was twice elected Seoul mayor in 2006 and 2010, but stepped down after his opposition to a program to provide free school lunches for all students fell apart in a referendum.

[Sound bite: Seoul Mayor Oh Se-hoon / April 8 (Korean-English translation)]
"Meeting Seoul city staff welcoming me on my first day at work, I feel a heavy responsibility once more. Seoul city will sprint again from today."
"I would like to do whatever I can to assist Seoul citizens who are troubled by the coronavirus and economic hardships."

In Busan, former lawmaker Park Heong-joon secured almost double the votes of the DP’s Kim Young-choon with about 63 percent to 34 percent.

The PPP won 15 out of 21 posts up for grabs in the latest election.

The victories by the main opposition party, which came a year after their defeat in the general elections, were viewed as a reflection of growing public criticism against the government over sexual harassment scandals involving former DP-affiliated mayors, skyrocketing housing prices and alleged land speculation by public officials.

The mayoral by-elections were called after the previous mayors - Park Won-soon in Seoul and Oh Keo-don in Busan, both affiliated with the ruling party - left the posts last year amid sexual harassment allegations.

The relatively high voter turnout - about 58 percent in Seoul and 53 percent in Busan - showed how invested voters were in the election. It marked the first time that the rate surpassed 50 percent for any by-election in a major city.

Both mayors will only serve until June 30 of next year when their predecessors' terms were supposed to end.

Despite the sweeping victory, some experts say the presidential race, only eleven months away, may be a different story as the DP received a much needed "vaccine."
Kim In-kyung, KBS World Radio News.
Share
Print
List