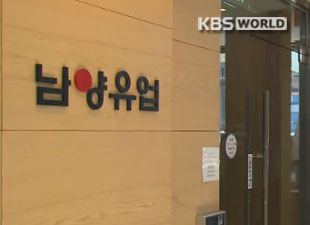 At a press conference on Tuesday, Hong Won-sik issued a public apology, before vowing to take responsibility by stepping down. Hong added that he will not pass down management to his children.

The chairman's resignation comes three weeks after Namyang claimed at a symposium that its Bulgaris yogurt reduces the chance of COVID-19 infection by 77-point-eight percent.

The Ministry of Food and Drug Safety, however, said relevant research did not involve animal testing and clinical trials. Police are investigating the company's alleged violation of food labeling and advertising laws.

There are separate allegations that Hong's eldest son, a senior executive, used company money for personal use, which prompted a boycott of its products.

In 2013, Namyang came under fire after an employee and forced a wholesaler to buy more goods than he could afford, verbally abusing the victim.
Share
Print
List