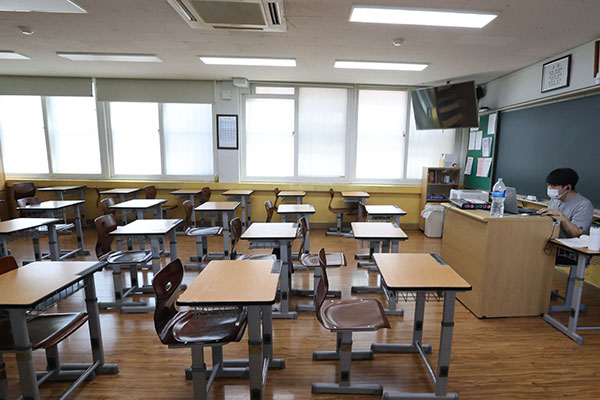 Anchor: Education Minister Yoo Eun-hye says the government will begin allowing more students to attend in-person classes later this month with the aim of returning to the pre-pandemic level by the fall semester. This comes as the government found that Korean students' academic performance had dropped despite online learning. On average, only 50 percent of their school year was spent in the classroom last year amid the country's social distancing campaign.
Kim Bum-soo has more.

Report: Amid the prolonged COVID-19 pandemic, the academic achievement of Korean students has fallen due to the reduced number of in-person classes, according to the government.

[Sound bite: Education Minister Yoo Eun-hye (Korean-English translation)]
"By subject in 2020, for all Korean, English and mathematics in middle and high schools, the proportion of students scoring level-one, which is below the basic academic standard, rose overall and the proportion of students receiving level-three, above the average academic performance, fell overall from the previous year. Alongside the reduced satisfaction in school life, we have also confirmed that affective characteristics, such as confidence, interest, and learning desire, have dropped in general."

The minister said the current online curriculum could not entirely keep up with the conventional face-to-face learning environment.

In 2020, the number of days Korean students took in-person classes halved from the pre-pandemic 190 days. Elementary school students attended face-to-face classes only 92 days last year while the number stands at 88 and 104 days for middle and high school students, respectively.

Yoo said her ministry will gradually increase in-person classes to the full level in the second semester of the current academic year, beginning in the fall.

[Sound bite: Education Minister Yoo Eun-hye (Korean-English translation)]
"We will gradually increase face-to-face classes with the goal of full reinstatement in the second semester. Expanding physical attendance is the global trend to resolve educational deficiency and emotional issues and is the first step to normalcy and educational recovery. Starting from June, more in-person classes will open for middle schools in the Seoul metro area."

If the current social distancing regulations are kept, classroom density for middle schools will be raised from the current one-third to two-thirds of the pre-pandemic level, starting from June 14.
Kim Bum-soo, KBS World Radio News.
Share
Print
List