No. of People Who Received 1st Dose of COVID-19 Vaccine in S. Korea Tops 10 Mln 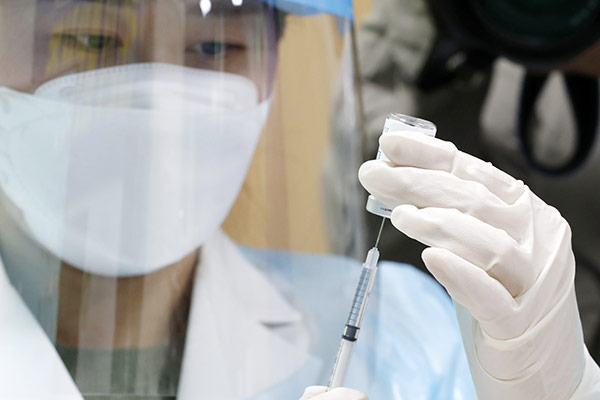 Anchor: The number of people who have received at least one shot of a COVID-19 vaccine in South Korea topped ten million on Thursday, just 105 days after the nation first launched its vaccination program. Also on Thursday, vaccinations began for reserve forces, civil defense members and others in charge of defense and foreign affairs aged 30 or older.
Our Bae Joo-yon has more.

Report: The Korea Disease Control and Prevention Agency(KDCA) said a little over ten million people have received their first round of a COVID-19 vaccine as of 11 a.m. Thursday. This means that 19-point-six percent of the population has received at least one shot.

Also from Thursday, vaccinations began for some 894-thousand reserve forces, civil defense members and others in charge of defense and foreign affairs who are 30 and older and under 60.

This group will be receiving the single-shot Johnson & Johnson vaccine through next Wednesday at designated medical facilities.

Currently, the first round of AstraZeneca vaccinations for seniors aged between 60 and 74 is also under way and will continue through next Saturday.

Starting from next Tuesday, teachers at kindergartens, daycares and of first and second graders as well as essential workers, such as police officers, members of the Coast Guard and firefighters who are younger than 30 will begin receiving Pfizer vaccines.

As of 12 a.m. Thursday, a total of 611 new infections were reported in the nation.

Quarantine authorities are on alert as clusters, both big and small, are being reported throughout the country and cases of highly transmittable COVID-19 variants that entered from abroad are on the rise.

On Friday, the government is set to unveil social distancing rules that will be applied from next week.

Observers believe the government will extend Level Two for the Seoul metro area and One-point-Five for the rest of the country, as well as continue to prohibit private gatherings of five or more people.
Bae Joo-yon, KBS World Radio News.
Share
Print
List