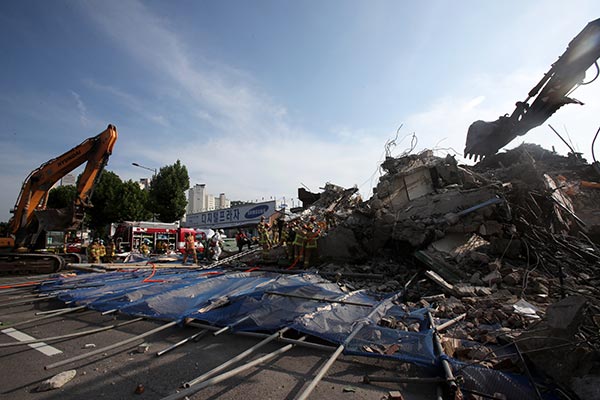 Anchor: Authorities continued to rummage through the rubble of a collapsed building in Gwangju on Thursday, in search of possible additional casualties. Police have launched an investigation to determine what happened and who can be held accountable.
Choi You Sun reports.

Report: A search operation continued for the second day on Thursday at the site of a five-story building that collapsed in the country's southwestern city of Gwangju.

Local fire authorities mobilized heavy vehicles and equipment until early morning Thursday to salvage a bus that was buried underneath the debris.

No additional casualties have been reported since nine people onboard the bus were found dead and eight others injured the previous day.

Police have set up an investigation headquarters and began a joint inspection of the location with forensic experts to determine whether safety regulations were strictly followed in setting up the demolition.

Ten people have been summoned for questioning, nine of whom are involved in the redevelopment project and the process to prepare for the demolition. One was a witness at the scene.

The incident was reminiscent of a similar disaster two years ago in Jamwon-dong, Seoul, in which a five-story structure collapsed onto three passing cars, killing one of the drivers and seriously injuring three other people.

Investigators found that the building in Jamwon-dong had lacked the proper safety equipment needed to proceed with demolition. A slew of indictments against the property owner, engineers, auditors and supervisors followed.

The National Office of Investigation(NOI) pledged to get to the bottom of the disaster in Gwangju to erase any trace of doubt regarding public safety concerns.

Amid public outrage over what appeared to be yet another example of a blatant disregard for industrial safety measures and precautions, Chung Mong-gyu, the chairman of HDC Hyundai Development Company, the builder on the project, issued an apology.

At a press conference at Gwangju City Hall on Thursday, Chung said he feels heavy responsibility for what happened, pledged to do everything possible to help the victims and families and to adopt measures to prevent future disasters.

As for why there was no supervisor present at the time of the collapse, HDC President and CEO Kwon Soon-ho, at the press conference, said the contract did not require that HDC provide one.
Choi You Sun, KBS World Radio News.
Share
Print
List