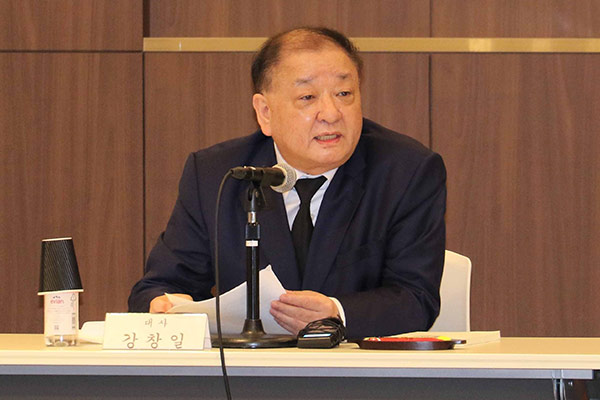 South Korea's Ambassador to Japan Kang Chang-il has urged Tokyo to agree to dialogue without preconditions, saying Seoul has thought of many ways to resolve pending issues including wartime forced labor.

Speaking to Japan's Asahi Shimbun on Friday, Kang stressed that the important thing is for the two countries to come face-to-face and jointly work toward a resolution.

Arguing that all reparation issues were settled in a 1965 bilateral treaty, Tokyo has demanded that Seoul present ways to resolve South Korean court rulings that ordered Japanese firms once engaged in wartime forced labor to compensate Korean victims.

Highlighting that diplomacy is not a war and that no one side can win 100 percent, the ambassador said both sides should make concessions and explain the outcomes to their citizens in a way that can be accepted.

Ahead of the Group of Seven(G7) summit hosted by Britain, which both President Moon Jae-in and Japanese Prime Minister Yoshihide Suga will attend, Kang urged Tokyo to act "maturely" and agree to bilateral talks despite ongoing disputes.

Regarding this year's Tokyo Summer Olympics, which faces calls for cancellation amid the pandemic, Kang said Seoul supports the event, adding that he hopes Moon can visit Japan during the Games.
Share
Print
List