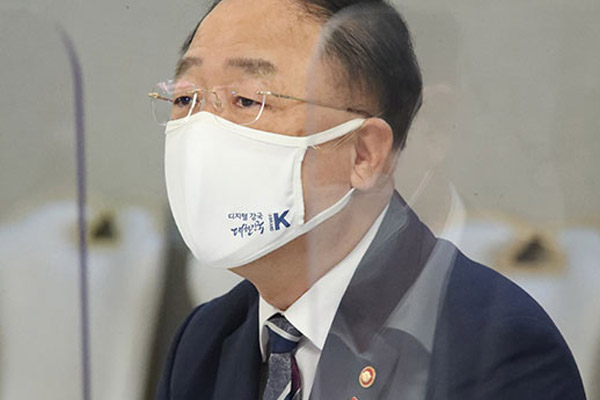 Finance Minister Hong Nam-ki pledged financial and tax support for industries that fall under the government's New Deal initiative and to meet its goal of becoming carbon neutral by 2050.

Hong made the pledge on Thursday during a meeting on the nation's transition into a digital and carbon-neutral economy.

The minister said the government plans to earmark more than 30 trillion won towards the Korean New Deal project next year, specifically to support industrial restructuring and a fair labor transition.

The government will revise laws to help more businesses become eligible for deregulation and tax support. This will include corporate restructuring to support digital transition to eliminate carbon emissions.

Companies that receive approval for government support on carbon neutrality restructuring will be eligible for a state-backed guarantee of 100 billion won this year, as well as support in research and development. South Korea also plans to launch a 500 billion won financial support program to assist in corporate restructuring and transition.
Share
Print
List