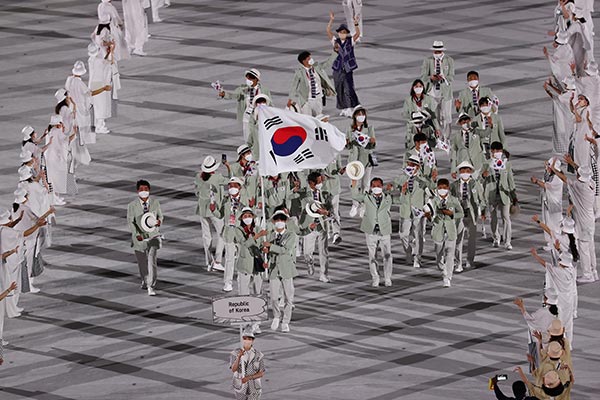 Team Korea has begun its Tokyo Olympics campaign in earnest as the pandemic-delayed Games finally kicked off on Friday night.

Although there are a total of 354 athletes, officials and staff representing the country during the Olympics, the marching contingent was downscaled amid the ongoing wave of COVID-19 in Tokyo.

With a total of 339 gold medals up for grabs in 33 disciplines during the two-week run, South Korea is seeking a top ten finish in gold medal standings with seven or more gold medals.

An early measure of success will come on Saturday when Team Korea vies for up to five gold medals in archery, shooting, fencing and taekwondo.

Archery, which South Korea is banking on more than any other sport, will bestow five gold medals and the country will aim for the first of them in the inaugural mixed team event on Saturday. The final is scheduled to begin at 4:45 p.m.

Two finals for taekwondo will begin at around 9:30 p.m.- the women’s 49-kilogram event and the men’s 59-kilogram event, in which Sim Jae-young and Jang Jun will each vie for gold.

Meanwhile, North Korea sat out the Olympics for the first time in 33 years, citing the need to protect its athletes from the pandemic.
Share
Print
List