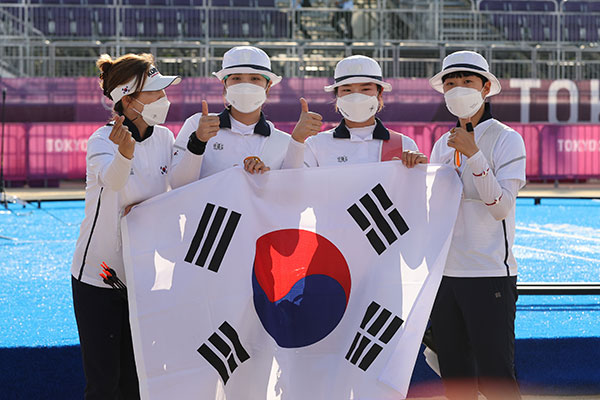 Team Korea has won the women’s team archery gold at the Tokyo Olympics, continuing their streak at the Olympics to their ninth win.

The three-member team consisting of Kang Chae-young, Jang Min-hee and An San beat the Russian Olympic Committee team 6-0 during the finals of the event at Yumenoshima Final Field in Tokyo on Sunday.

South Korean archers have won the women’s team event since the 1988 Seoul Olympics when it debuted. With the latest victory, Team Korea is tied for the longest gold medal streak in an event along with the U.S. in the men’s swimming 4x100m medley and Kenya in the men’s steeplechase.

South Korea has now picked up 25 gold medals in archery at the Olympics, making it the most gold-producing sport for the country. The nation’s short-track speed skaters have brought home 24 Olympic gold medals so far.

It is Team Korea’s second gold medal of the Tokyo Games and also An's second following the mixed team event on Saturday, which she won with partner Kim Je-deok.

Kim will also aim for his second gold medal on Monday as the country seeks to defend its title in the men's archery team event.
Share
Print
List