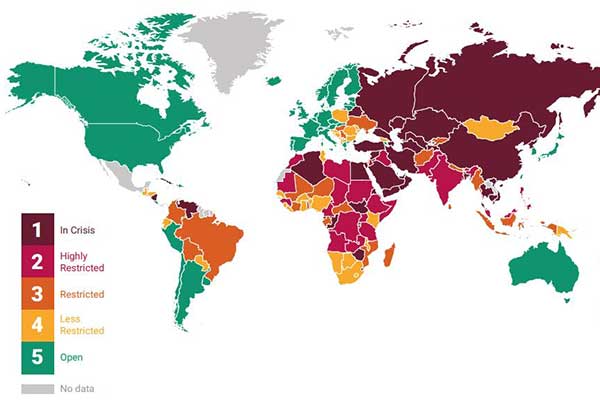 New data finds that North Korea ranks at the very bottom in the world in terms of freedom of expression.

According to the Global Expression Report for 2021 released by London-based human rights organization “Article19,” North Korea scored zero out of 100 in freedom expression.

North Korea was the only country to score zero. Syria, Turkmenistan and Eritrea each scored one point while China received two.

The report looked at 25 indicators across 162 countries to create an overall freedom of expression score for every country on a scale of one to 100.

Based on such scores, the report categorizes countries into five categories: in crisis, highly restricted, restricted, less restricted and open. Since 2010, the North has been in the “in crisis” category.

Meanwhile, South Korea received a score of 83 points, ranking 31st in terms of freedom of expression. Since 2018, South Korea has been in the “open” category.