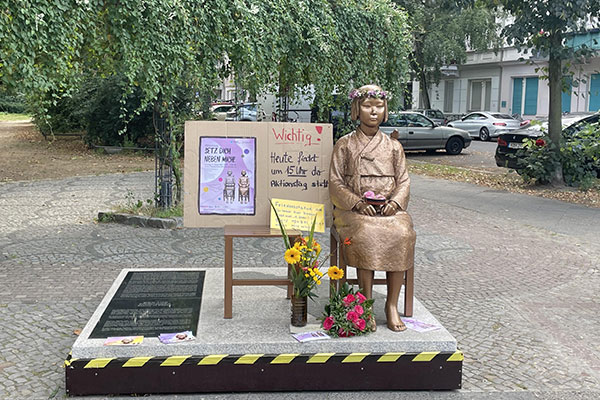 The Japanese government said Monday it is lodging a complaint with Germany over its decision to extend by another year the installation of a statue commemorating victims of Tokyo's wartime sex slavery.

In a regular briefing, Japan's Chief Cabinet Secretary Katsunobu Kato gave the response to a question regarding the extension granted by the Mitte district office in Berlin.

In a letter last week to Korea Verband, a Berlin-based civic group, local officials of Mitte said they approved a one-year extension of a special permit for the Statue of Peace through September 28 next year.

Kato expressed regret, saying the decision came despite Tokyo's efforts to offer its explanation of the issue. Calling it unacceptable, he said Japan strongly protested the matter and will continue to contact related officials to demand the statue be quickly taken down.

The South Korean government is not said to be involved in the statue's erection which was led by Korea Verband. Seoul's Foreign Ministry maintains the stance that it is not desirable for the government to intervene in voluntary civic activities.
Share
Print
List