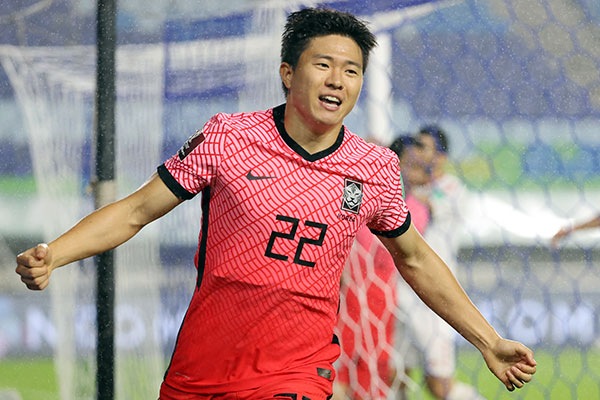 The national football team defeated Lebanon 1-0 in its second match of the final World Cup Asian qualifying round on Tuesday.

Kwon Chang-hoon scored the winning goal in the 60th minute at Suwon World Cup Stadium, bringing the nation's bid back on track after a scoreless draw with Iraq last Thursday.

With four points from two matches so far, South Korea is currently the runner-up in Group A with Iran leading the six-team group with six points after thrashing Iraq 3-0 on Tuesday.

The United Arab Emirates is two points behind South Korea after a 1-1 draw with Syria on Tuesday. Team Korea will face Syria at home on October 7 and play Iran in Tehran on October 12.

The top two teams from the two groups in the final Asian qualifying round will earn a direct berth to the 2022 World Cup in Qatar, while the third-place teams will get one more chance in a play-off.

This will be South Korea’s tenth consecutive time making it to the World Cup if the team advances.
Share
Print
List

Headline News
Daily COVID-19 Cases Jump by 686 to 1,952 on Wed.
Sullivan: S. Korea, US May Differ on Sequence of Steps for Dialogue
Former Pres. Roh Tae-woo Dies at 88