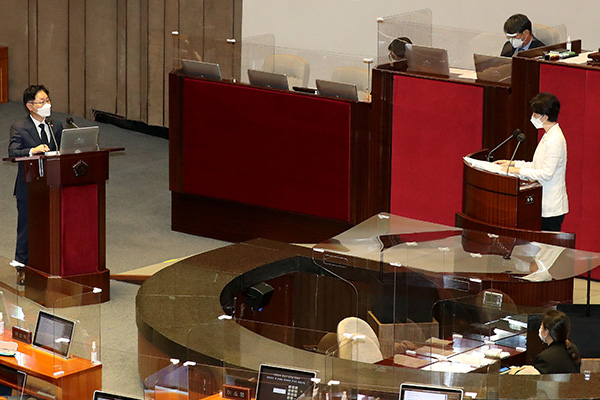 Democratic Party(DP) lawmaker Back Hye-ryun described the latest allegations surrounding Yoon as collusion between the prosecution and opposition camp which disrupts the foundation of the nation.

When asked about the relations between Yoon and another key figure in the scandal, prosecutor Son Joon-sung, Justice Minister Park Beom-kye said the two men had very special ties but stopped short of elaborating.

PPP lawmaker Kweon Seong-dong said he heard that Cho Sung-eun, an informant who first brought the allegations against Yoon, had sent related materials to Park ahead of providing it to the media.

In questioning Prime Minister Kim Boo-kyum, Kweon raised suspicions about the relationship between the spy agency chief and the informant, saying he heard a rumor that Cho is Park’s “political foster daughter.”

Kim simply replied that he understands that the NIS chief does not meddle in such affairs.
Share
Print
List