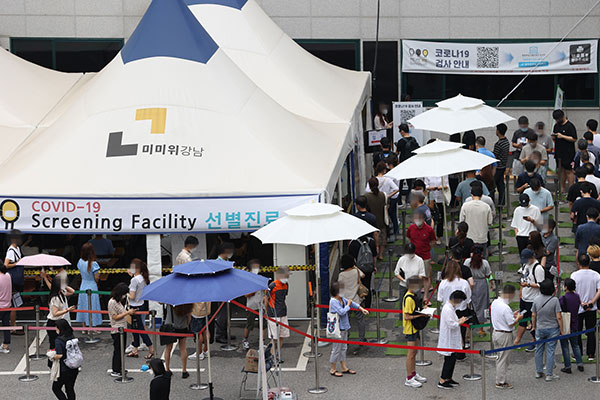 Daily COVID-19 cases are expected to exceed two-thousand once again amid concerns over a further spike during the upcoming Chuseok holiday.

According to health authorities and regional governments, one-thousand-941 new cases were confirmed nationwide as of 9 p.m. Tuesday.

It is 522 more than the number compiled by 9 p.m. Monday. The Korea Disease Control and Prevention Agency(KDCA) reported on Tuesday that one-thousand-497 cases were confirmed throughout the previous day.

The daily tally to be announced on Wednesday morning is expected to hit the two-thousand mark. The last time the tally topped two-thousand was last Thursday, when two-thousand-49 cases were reported.

Wednesday is set to mark the 71st consecutive day the tally has hit four digits with a daily average of one-thousand-791 cases reported for the past week through Tuesday.

The reproduction rate for the greater Seoul area, which has accounted for over 70 percent of daily cases lately, was one-point-01 as of last week, prompting concerns the surge in the region could continue for the time being.

The reproduction rate refers to the number of new infections caused by a single patient, with a figure above one indicating the disease is spreading.
Share
Print
List