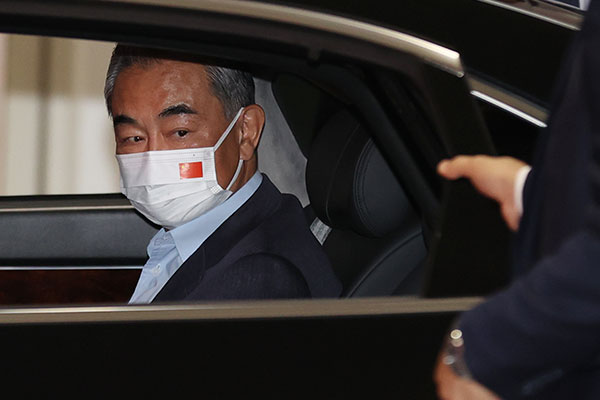 Chinese Foreign Minister Wang Yi is in South Korea for talks amid tension on the Korean Peninsula after North Korea's test-firing of long-range cruise missiles over the weekend.

Wang arrived at Incheon International Airport on Tuesday night following his visit to Singapore. His two-day trip to South Korea will begin with a meeting with Foreign Minister Chung Eui-yong on Wednesday morning.

Chung and Wang are expected to discuss ways to revive the peace process on the Korean Peninsula, including measures to resume dialogue between the United States and North Korea.

Wang's visit to Seoul follows talks in Tokyo on Tuesday among the top nuclear envoys of South Korea, Japan and the U.S. There, U.S. envoy Sung Kim reiterated Washington’s call for Pyongyang to return to dialogue. He also offered humanitarian aid regardless of progress in denuclearization efforts.

Attention is being drawn to whether Wang will react to the signs of the North resuming nuclear and missile activities or issue any messages to the U.S. Cooperation for next year's Winter Olympics in Beijing is also expected to be among the major agenda items.

Later on Wednesday, Wang is scheduled to pay a courtesy call on President Moon Jae-in, where the Chinese top diplomat could invite him to China for the Beijing Olympics.
Share
Print
List