Moon Pledges to Reduce Marine Plastic Waste to Zero by 2050 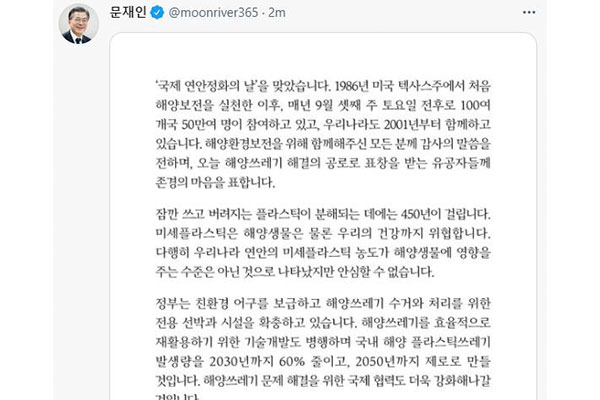 President Moon Jae-in has pledged to reduce the nation’s ocean plastic waste to zero by 2050.

Moon made the pledge in a social media message on Wednesday marking International Coastal Cleanup Day, adding the amount of plastic waste will be reduced by 60 percent by 2030 en route to achieving the ultimate zero-waste goal.

Moon introduced the government’s efforts to deal with marine waste, including distributing eco-friendly fishing gear and devices, installing and deploying more vessels and facilities to collect and dispose of marine garbage, and advancing the development of related technologies.

More than 100 countries around the world are celebrating International Coastal Cleanup Day in September. South Korea has joined since 2001.

President Moon earlier announced the nation’s intent to actively deal with ocean pollution issues during the Partnering for Green Growth and Global Goals 2030, or P4G, summit, in Seoul in May.
Share
Print
List