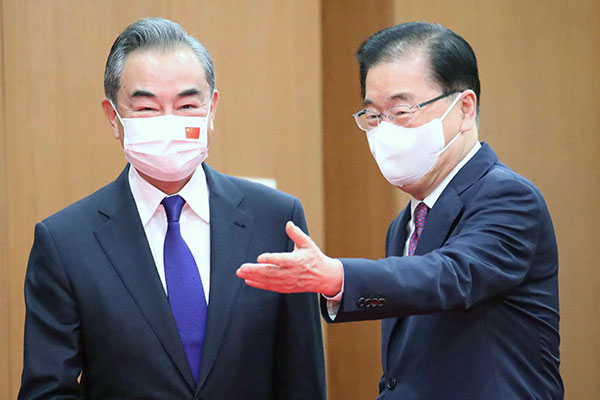 Foreign Minister Chung Eui-yong and his Chinese counterpart Wang Yi sat down for talks in Seoul on Wednesday in their first face-to-face meeting in five months.

In introductory remarks, Chung said Seoul and Beijing, as key partners, have worked closely on achieving the joint goal of denuclearizing the Korean Peninsula and establishing permanent peace. He then said he hopes China will continue to support the peace process.

Chung also expressed hope for the success of the 2022 Beijing Olympics, saying he wishes the upcoming Games will relay a message of hope for world peace and overcoming the COVID-19 pandemic.

Wang, on his part, said Seoul and Beijing are seeing their ties grow more mature and stable, citing their close exchanges and strategic partnership built over the past three decades.

He said the two countries maintain communication and adjust views on key international and regional issues. The Chinese foreign minister said both nations play an active role in protecting peace and stability, as well as promoting development and prosperity.

Asked by reporters about the North's recent cruise missile tests following the meeting, Wang said not only North Korea but other countries also conduct military activities.

He expressed hope that everyone will do what's helpful for the peace and security of the Korean Peninsula. The remarks are believed to allude to the joint military exercises between South Korea and the U.S. held last month, in addition to the North's missile tests.

Wang added that each party should make an effort to resume dialogue.

Later the same day, Wang is scheduled to pay a courtesy visit to President Moon Jae-in where he could extend an invitation for him to visit Beijing for the Olympics.
Share
Print
List