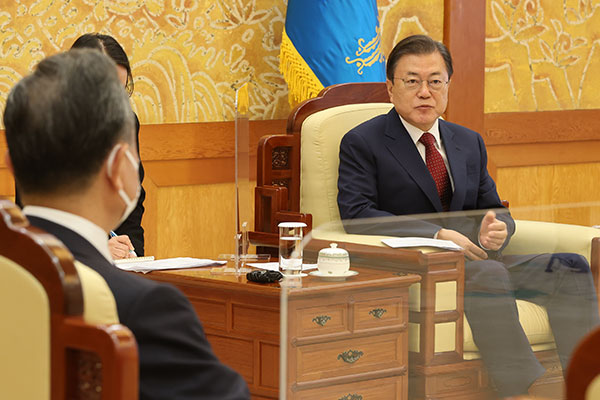 President Moon Jae-in has sought China's support for the Korean Peninsula peace process as he was visited by Chinese State Councilor and Foreign Minister Wang Yi on Wednesday.

Positively assessing Beijing's role and contribution thus far, Moon pledged to work with the international community, including China, to achieve denuclearization and peace on the Korean Peninsula.

Ahead of next year's 30th anniversary of Seoul and Beijing's diplomatic relations, Moon called for both sides to focus on further developing their ties.

The South Korean president highlighted the close communication and cooperation he has maintained with Chinese President Xi Jinping during the COVID-19 pandemic.

Wang, in response, stressed that the two sides are close neighbors and partners that aim to realize a win-win situation.

Stating that the two countries have respected each other's development path despite differences, the minister called for such tradition to be maintained for the future of bilateral ties. Wang added Seoul and Beijing's economic development is highly complementary, thus a focus on cooperation is needed.
Share
Print
List