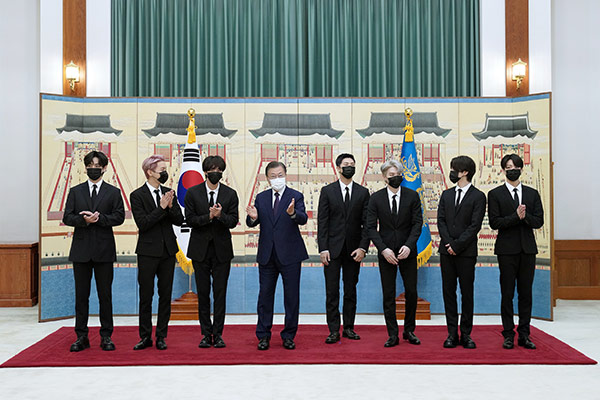 Moon is scheduled to speak at a Sustainable Development Goals Moment(SDG Moment) event Monday night, Korea time, where he is expected to call for global solidarity in tackling poverty, COVID-19 and climate change.

Joining the president will be K-pop group BTS, who were appointed as a special presidential envoy for future generations and culture to deliver messages of encouragement and hope to young people around the world.

Moon will also address the 76th session of the UN General Assembly early Wednesday, where he is expected to seek support for Seoul's peace efforts and declare its commitment to make more contributions to the international community.

The president also has bilateral summit talks planned on the sidelines with the leaders of Britain, Slovenia and Vietnam, as well as a meeting with the chairman and CEO of U.S. pharmaceutical company Pfizer.

Before returning home on Thursday, Moon will make a stop in Honolulu, Hawaii, for a ceremony to transfer the remains of South Korean and U.S. troops killed during the Korean War and to award medals to independence activists under Japan's colonial rule.
Share
Print
List